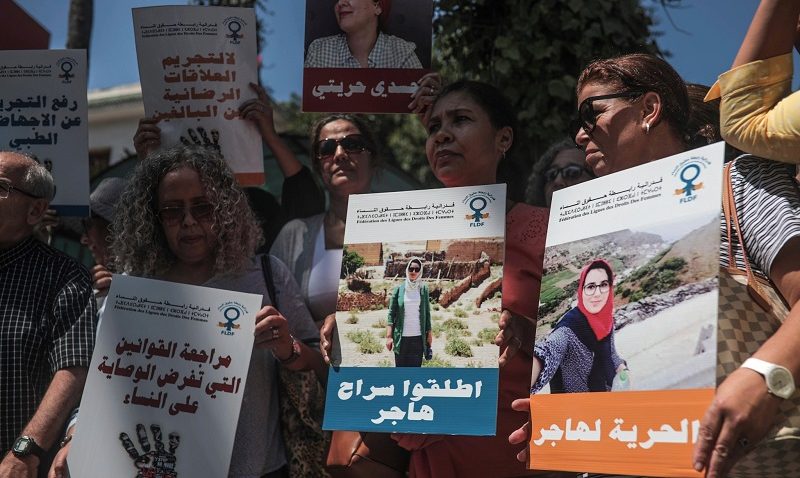 RABAT, Morocco — This weekend was supposed to have been a celebration of love.

The invitations had been sent, the flowers and cake ordered. Family and friends were getting ready to witness the wedding of a young Moroccan political reporter and a Sudanese university professor she met at a human-rights conference.

Instead, Hajar Raissouni and Rifaat al-Amin were arrested on Aug. 31 as they were leaving a gynecologist’s office in the Moroccan capital Rabat. They were charged with having sex outside of marriage and an abortion, both crimes in the North African kingdom.

The arrests outraged many in Morocco who saw it as another example of the government persecuting critical journalists and activists by charging them with moral crimes.

The doctor, along with an anesthesiologist and an office assistant, has been charged with performing an abortion. But he insists that he did not. Quite the contrary, he said he had saved Ms. Raissouni’s life after she suffered a blood clot.

The Moroccan government casts itself as a champion of women’s rights. But by prosecuting a couple and medical workers for a procedure that is done hundreds of times every day in the country, critics argue that the government undercuts its own claims and exposes its determination to silence dissent.

Ms. Raissouni works for Akhbar al-Yaoum, a daily newspaper that is one of the few independent news sources in Morocco. Though it employs fewer than a dozen reporters and has been in existence for only a decade, the paper and its journalists have found themselves in court many times.

In 2018, its founder and publisher was sentenced to 12 years in prison on sexual assault charges in a prosecution that the United Nations Working Group on Arbitrary Detention concluded was unfair.

Ms. Raissouni has focused on human rights and political reporting in her work, said an uncle, Soulaimane Raissouni, who is also the editor of Akhbar al-Yaoum.

“I don’t have hope, and neither does she,” said her uncle and editor. “One of her lawyers told her to prepare herself to spend at least one year in prison.”

Last year, Ms. Raissouni covered protests in the northern Rif region of Morocco that resulted in the jailing of hundreds of activists. Another uncle, Ahmed Raissouni, is a vocal critic of the government.

The press freedom group Reporters Without Borders says the Moroccan government has long tried to intimidate activists and journalists. The courts often put them on trail for matters seemingly unrelated to journalism or political activities, according to the group.

Abdeslam Imani, the prosecutor, said the authorities had not targeted Ms. Raissouni. They had been simply watching the doctor’s clinic to see if unlawful abortions were taking place, he said.

“The arrest of the journalist Hajar Raissouni has no connection whatsoever to her profession,” Mr. Imani said. “It happened by chance when she was in a medical office that was under surveillance.”

Ms. Raissouni and Mr. al-Amin, whose trial resumes on Monday, face up to two years in prison. The doctor could be imprisoned for up to 10 years.

Last week, during an initial hearing in the case, dozens of people gathered in front of a Rabat courthouse to demand her immediate release.

“The public conversation around her private life has been deeply unpleasant to watch,” said one of them, Zoubida Mseffer, 35. “Whenever someone has controversial political opinions, their private lives can be used against them. It feels that we, as citizens, are under conditional liberty.”

Abortion rights activists have also seized on the case, seeing it as an opportunity to change the country’s restrictive laws just as Parliament is set to consider amendments to allow abortion in cases of rape and incest. Currently, the procedure is legal only if a woman’s life is at risk.

Dr. Chafik Chraibi, who has worked to draw attention to cases where women have died or suffered complications from abortions, said that field research showed that at least 600 to 800 abortions were performed daily in Morocco, most by licensed doctors.

Official numbers show that 73 people were arrested in 2018 on charges of performing or receiving illegal abortions. Dr. Chraibi said that the authorities usually tolerate abortion, typically making arrests only if someone dies or a third party complains.

“When I was a student, abortions were so common that many people believed they were legal. I know doctors that performed 10 a day,” Dr. Chraibi said in a rare comment by a doctor on these kinds of cases.

Dr. Chraibi said that he has looked at the medical evidence presented by the prosecution and the defense and strongly believes that no abortion was performed.

Ms. Raissouni’s legal team says that the charges are trumped up and that letters claiming to document medical evidence of an abortion have been fabricated. They also said that she was examined by a doctor after her arrest without her consent.

Myriam Moulay Rchid, a lawyer for the accused doctor, said that Ms. Raissouni had sought his help for a hemorrhage. She said the doctor, Jamal Belkeziz, 68, was once decorated by the king of Morocco — evidence that the authorities had thought highly of him.

“The doctor was performing an emergency rescue operation to remove a blood clot that caused the bleeding,” she said. “He saved her life.”

The country’s press code was changed in 2016 to abolish prison sentences for supposed journalistic offenses. Instead, though, press freedom advocates say the penal code has been used increasingly to punish critical journalists for offenses seemingly unrelated to their work.

A prominent journalist, Ali Anouzla, was accused of promoting terrorism in 2013, and an investigative reporter, Hicham Mansouri, was jailed on adultery charges in 2015.

Since her arrest, Ms. Raissouni has been subjected to a brutal online campaign attacking her character. But she has also received some support.

“The Moroccan regime prides itself in advancing women’s rights,” said Aboubakr Jamai, a former journalist who was awarded the International Press Freedom Award by the Committee to Protect Journalists in 2003. “Now we know that these rights are thrown out of the window when it comes to silencing dissenting voices, and independent journalists in particular.”