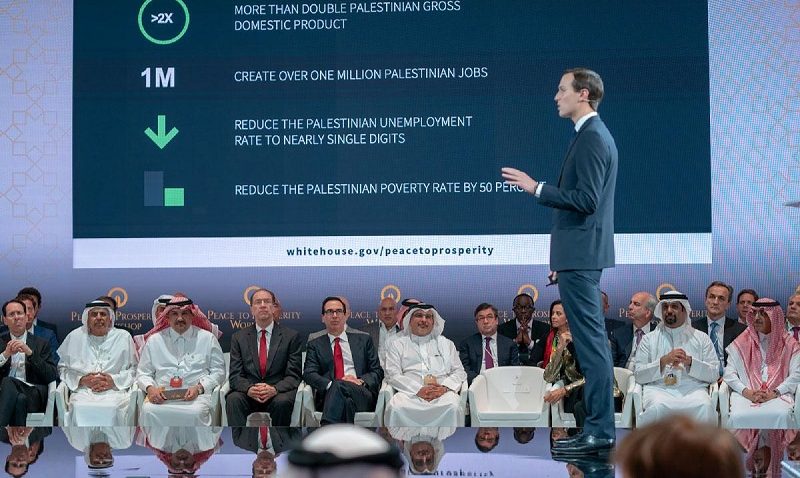 Jared Kuchner during the Manama summit

International public opinion, and especially in the Arab world, is following with some interest the summit in Manama (Bahrain), which aims to resolve the Palestinian question. However, this summit that was held on 25 and 26 June 2019 is a total failure that will have no impact on this issue in the future. There are several factors that indicate this failure and they are

Firstly, this summit does not enjoy the full support of the US administration. This is an initiative of Jared Kuchner the husband of President Donald Trump’s daughter. For this reason, the official presence of those responsible in Washington is null and void

Second. The Establechement in the US does not like this initiative because it deprives Palestinians of a state in the future. For big initiatives, secret services such as the CIA and US diplomacy are usually involved, creating a favourable international public opinion. Contacting journalists, talking to political parties and even civil society in many countries, in this case in the Arab world. This happened, for example, at the Madrid Peace Summit in 1991, which sought to resolve the Arab-Israeli conflict. Because the big initiatives surpass the presidents and are the responsibility of the different official organisms in the USA, with the aim of guaranteeing the continuity of these initiatives in the future

Thirdly, the Middle East is a very complicated region, there are interests from Russia, China and the US. In addition, the emergence of strong regional countries such as Iran and Turkey. The world is increasingly multipolar, no country can only solve a conflict with political, cultural and religious ingredients such as the Palestinian question. It requires an effort from the great powers

Fourthly, the Palestinian question cannot be resolved without resolving the remaining issues of the Arab-Israeli conflict, such as the Golan in Syria or the borders between Israel and Lebanon. Syria and Iran are not going to allow a solution without their approval

Fifthly, the economic recipe as a solution to the conflict as the Bahrain summit seeks is a complete failure, because the conflict is territorial and not economic

Finally, this summit does not enjoy the support of a major actor which is the European Union. In fact, Europeans reject Washington’s new policy in the Middle East and mainly on the Palestinian question. Europeans demand a political solution based on the right of the Palestinians to have a state

The Bahrain Summit is yet another argument for the weakness of US policy in the Middle East. This is a Kuchner initiative much more than an American state initiative as a whole. That’s why the summit has failed, a failure already programmed