Bolton: think war, dream war and believe only in war 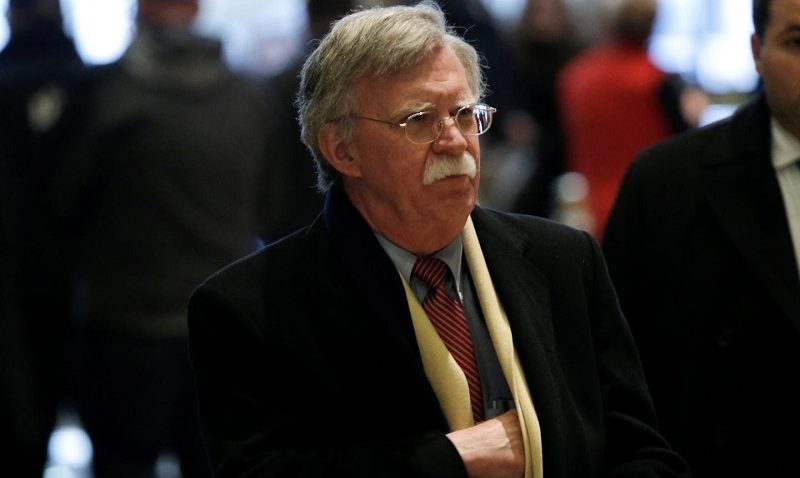 National Security Advisor John Bolton is the main hawk of war thinking in the United States, he talks about war, thinks about war, dreams of war, and believes in war. However, despite its important position in the White House, it still has no real influence on military decisions due to certain current circumstances, mainly Washington is no longer willing to wage new military wars, but rather economic ones. But what is this official’s view of international relations and why is he so obsessed with the idea of war.

The White House has never seen a personality who accumulates belligerent statements like John Bolton’s move into the position of adviser. The paradox is that despite the impulsive nature of President Donald Trump, who constantly stirs up threats of war and sanctions, he does not reach the level of his advisor John Bolton. One of the most mocking comments of his friends and opponents of the Pentagon and the State Department about his fondness for war is this: “Bolton’s head is full of enriched uranium. “So much so that this character tries to take advantage of the slightest divergence between Washington and another country to stir up the threat of war, which has the effect of irritating President Trump himself. Above all, to provoke military leaders who believe that war is not a game and that talking about the threat of war in the morning and at night ends up damaging the prestige of the American army.

Bolton, for example, capitalized on the opportunity of the arrival in the Mediterranean of the U.S. aircraft carrier USS Abraham Lincoln, scheduled for a year ago, to start talking about an attack on Iran. This has led international experts and analysts and the world press to predict an imminent war, when in reality it is like innocent people’s day in May, when the U.S. military presence in the Persian Gulf is the lowest in more than twenty years.

The question that arises in this sense: how does Bolton think about international affairs and why does he always opt for war?
Bolton is one of the most radical leaders when it comes to defending the greatness of the United States, which, according to his conception, must permanently remain the greatest political, economic and military force known to mankind to date. Consequently, it must be the only one that decides to impose its own world view and defend its interests, and that is how war should be used to implement this strategy. The paradox is that, in his youth, Bolton had been among the young Americans who refused to participate in the Vietnam War in the 1970s. He didn’t want to take part in the war, but he defends the thought of war. In his book “Surrender is not an option,” published in 2008, and subsequent articles, he underscores the need for near-permanent war for the United States.

Bolton believes in the pre-eminence of the United States over the United Nations, and believes that the United Nations should not interfere in Washington’s international affairs unless it provides support and assistance, but should never counter U.S. decisions.
-Bolton believes in Washington’s need to exploit all of Russia’s and China’s weaknesses to prevent them from becoming major powers that influence international decisions and compete with the United States or threaten U.S. leadership. Therefore, it is an advocate of economic war against China and reducing Russian oil sales.

-The need for the United States to eliminate the political regimes that operate in the orbit of Russia or China and harm the interests of the United States of America, such as Cuba and Venezuela under the Monroe doctrine, so that Washington can easily control the entire American continent.
-believes in the need to eliminate the Iranian regime as a strategic necessity of the United States. It implies that the war in Iraq was intended to surround Iran rather than the fall of Saddam Hussein’s regime. He even accuses U.S. intelligence services of preventing Republican President Bush Jr. in 2006 from waging a war against Iran. Aware of the gradual transition from the centre of economic and military gravity of the world to Asia, he stressed the need to eliminate the North Korean regime in order to keep all the regimes in the area under liberal influence and thus promote American supremacy and, subsequently, surround China.

-Bolton believes in the need to weaken the European Union to prevent it from becoming an economic or military giant because it is unwilling to defend Western interests against China and Russia. That is why it encourages Brexit (divorce between Britain and the European Union), which accelerates this weakening and declares Brexit to be a victory for democracy.

Bolton’s geopolitical view of the world is framed within the thought led by Paul Kagan, whose book “Return of History” is inspired and develops Samuel Huntington’s theses on the clash of civilizations.
But Bolton’s tragedy is that he takes his place at a time when U.S. military leaders no longer see war as a serious option because it exhausts American society. And when the leader of the White House, Donald Trump, is quite favorable to restoring the greatness of the United States through economic wars to weaken both adversaries and partners, more than the use of aircraft carriers and fighter planes, while encouraging U.S. companies investing abroad to return to the United States and attempting to reduce immigration from Latin America and the Third World in general.

Bolton looks like a Cold War era thinker, who got the wrong time. It came from the past in the car of the film “Back to the Future” by Roberts Zemeckis and played by Micheal J. Fox, and stayed in the 21st century. And how Zimeckis does not want to make the fourth part of this film, because the world must put up with Bolton.