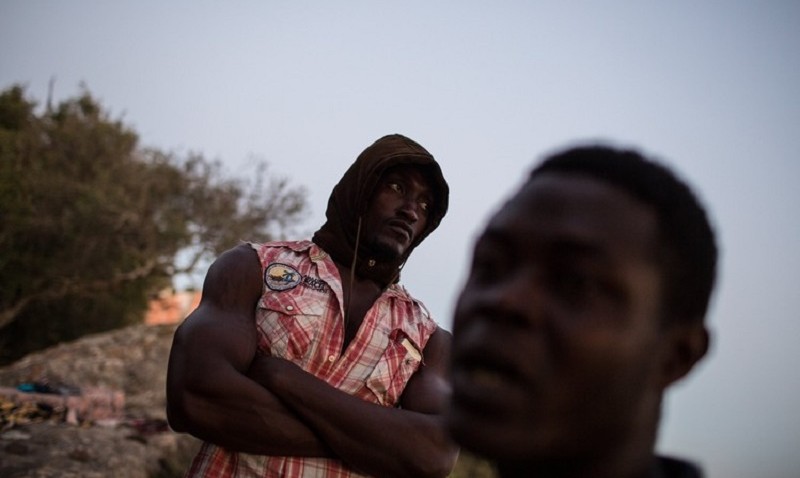 As the world watches hundreds of thousands of Syrians crossing into Europe from the east, territories north of the Sahara are filling with comparable numbers of Africans determined to make their own entrance.

Migrants from more than a dozen African nations are descending on Morocco, Algeria and Libya in unprecedented numbers, sleeping in abandoned apartments, derelict warehouses and on city streets. Thousands are living in fast-expanding forest encampments, surviving off garbage and stolen water.

Here in Morocco’s capital, some 50 West Africans en route to Europe live in a derelict squat known to residents as The Titanic because it is large and full of travelers who might not make it. The housemates include multilingual university graduates, former army officers, and even a successful pop singer, who now dine nightly on 50-cent meals of eggs and stale bread.

Some have been stuck here for years: robbed and tortured by smugglers, shunned by neighbors and sliced by barbed wire on border fences they have tried to scale.

“Here, we’re like ghosts. Nobody sees us or considers us, and we’re not productive,” said 23-year-old Bamba, a university dropout from Ivory Coast, who has failed four times to reach Spain on a blowup boat. “We can’t advance and we can’t go home.…For us, it’s Europe or die.”

Behind the wave of migrants crashing into Europe lurks another story. The Mediterranean shore of Africa is becoming a vast waiting room for the record numbers who fall short.

In Morocco, new fences financed with billions of euros from the European Union have made it harder than ever to sneak into the two Spanish enclaves along the shore. High-tech, heat-seeking cameras and naval patrols have made it tougher to sail across the thin Strait of Gibraltar separating Africa from Europe. 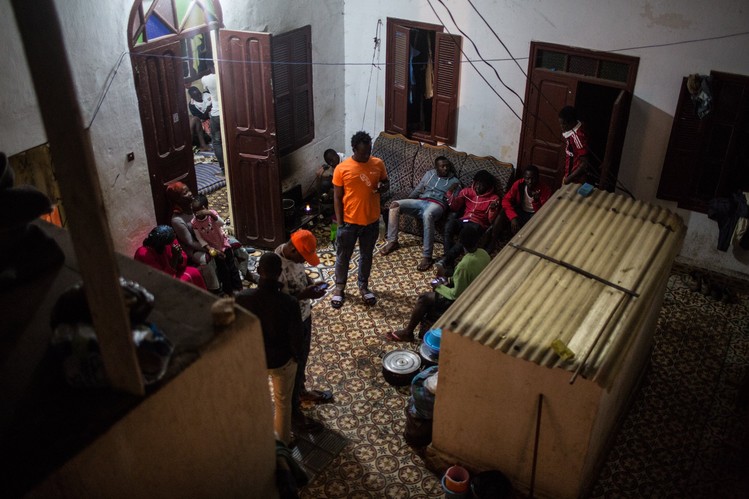 And yet each year, more young men keep coming. They join the tens of thousands of West Africans already here, many begging or day laboring for the cash to buy a rowboat.

As many as 100,000 African migrants are in Morocco and more than half a million in Libya, data from the International Organization for Migration show. The migrants are overwhelmingly young men, determined to inch north.

They are also living testimony to where Europe’s counterimmigration strategy falls short.

Increasingly, policy makers in the EU want to pay neighbors like Turkey and Tunisia to erect the fences and controls needed to choke off a new migrant front. In September, the bloc pledged €1 billion ($1.3 billion) to feed and shelter refugees outside Europe and to erect new border walls. German Chancellor Angela Merkel has backed a separate and similar €3 billion aid plan for Turkey.

Morocco is a testing ground. Miles of spiked, three-tiered 20-foot fencing around Spain’s enclaves here have reduced migrants climbing onto EU territory to 100 so far in 2015 from 2,100 last year.

But they haven’t persuaded many Africans to go home. In fact, more than ever are coming to try their luck. And as more come, more make it, too: Arrivals in Spain—largely by blowup boat—rose 30% to 2,800 in the first three months of this year compared with the year-earlier period, said Frontex, the EU’s border agency.

The remainder are stuck, for the moment, with the sense that their window of opportunity may be closing: An exodus of Syrians has exhausted Europe’s appetite to absorb immigrants.

Many defy the easy definitions between economic migrants and refugees: Years of terrorist attacks across the Sahara have made it impossible to sort out which villagers are fleeing Islamist insurgencies from those who are running from poverty.

Their presence puts Morocco in new and puzzling position. It is a country of neither immigrants nor emigrants, but rather a kind of limbo zone on the edge of Europe. 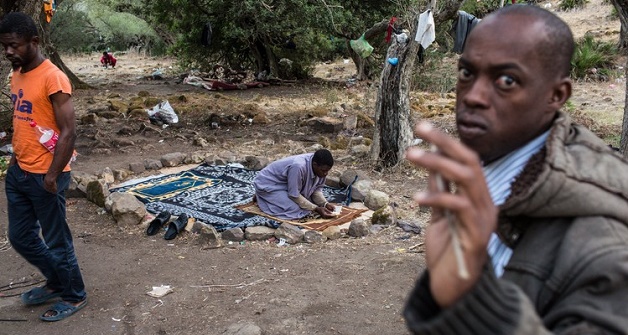 “Morocco has inadvertently become a country of destination, not transit, and the question is whether this situation is sustainable and where do the migrants go if it’s not?” said Arezo Malakooti, director of migration research at Altai Consulting, a research group. “My feeling is: You can’t stop it. We’re not going to be able to stop this flow.”

A strip of water just nine miles wide separates the world’s richest continent from the poorest. Herons and storks swoop back and forth across the Gibraltar Strait.

Humans have rowed across since the days of Greek legend, when Hercules is said to have passed through here, slicing mountains with his sword. Shiploads of Europeans fleeing World War II wound up here. Moroccans sailed in the other direction in similar numbers, finding work in France and Spain, until the 1990s, when the wage gap between their country and Europe narrowed.

These days, it is West African men who line Morocco’s mountainous coast, waiting to cross. “I’ve tried twice. Each time, they send me back,” said Amadu Keita, a Gambian standing on a mist-enveloped highway. Some 300 other West Africans were begging on the same road, watching cars speed toward the resort of Cueta, the fenced Spanish enclave where tourists golf and scuba dive. “We keep trying,” he said.

Morocco has struggled to get these people to go home. The government and the IOM have offered them free flights and bus trips back to their countries. But few people are signing up.

Tensions with some locals are rising: “They are everywhere. And they make too many babies,” complained a 50-year-old woman, living down the street from The Titanic. “What’s more, they bring in diseases from their country.”

Added another neighbor, a man in his 60s: “One day, we will be submerged in blacks.”

To evade police, thousands of migrants have moved into the forests to erect tent cities. Pitched atop a Tangier graveyard, in clear view of Europe’s coastline, 540 people from Cameroon, Ivory Coast, Nigeria and Mali have lived for four months in a camp without sanitation, electricity or running water. By day, they beg, forage for food and plot new routes across the sea. At night, they play cards, sew up their shoes, and drum on barrels while singing Rihanna songs.

“Here, we have doctors and engineers. There are people in this camp who could be leaders of our nations,” said Newton, a 28-year-old trilingual university graduate from Cameroon. “We want Morocco to understand what we came here to do is to pass through, not to stay,” added Kenzo, a 23-year-old from Ivory Coast.

Morocco has also tried to assimilate these thousands of young people. Last year, it gave resident permits to more than 17,000 migrants.

And yet many of those cardholders keep boarding boats, for reasons that encompass pride, family expectations, financial gain—and the desire to lay eyes on the continent that colonized Africa.

“The situation is so complicated,” Mustapha El Khalfi, spokesman for Morocco’s government. “We have a country policy, but we also need a world policy.”

The Door to Europe

Bamba’s journey north began after a war in Ivory Coast crashed his father’s car-repair shop, in 2011. For 18 months, he moved through the deserts of Mali and the forests of Algeria, a sociology major dropout, sleeping under the stars.

“The war came, the money ran out and we had to go,” he said. “It’s true I could earn something, but I couldn’t make anything of myself there.”

Well over six feet tall and an avid soccer player, Bamba arrived in Morocco to scale the 20-foot-high fences guarding Spain’s enclaves here. But he sliced his forearm and he says Moroccan police beat him.

So he bought a ticket on an inflatable boat, arranged by smugglers. The migrants, who pilot the rafts, call this method ramer-ramer—French for paddle-paddle.

On the first trip, he nearly drowned. On the second, Morocco’s navy caught him; on the third, the motor broke down; on the fourth, the person with the boat never showed.

Finally, he ended up in The Titanic, the condemned building packed with stuck migrants.

Some have passed their entire youth here: “All the little kids I knew when I was home have grown up and had their own little kids,” said Ali, a 33-year-old Ivorian, who has spent nine years trying to reach Europe. “But look where I live.…I know I made a mistake—I risked it all to come and it hasn’t worked out. But it’s better that I stay.”

Crammed into the derelict building flanked on either side by uninhabited ruins, the men here eke out a living by carrying fruit palettes at sunrise at the nearby market.

Everyone here is trying to make it to Europe—and everyone has stories of failed attempts and new plans they hope will succeed.

“We’ve tried everything and we’ll continue to try anything,” said the house manager, known as “the chief,” as he piled chewed grapeseeds on a cardboard box used as a table. “The door to Europe is closing and we may be missing our chance, but no one is giving up. More come every week,” he said.

Around an hour later, a young Mauritanian man showed up at the door, fresh from the airport, with a bag over his shoulder: “I just got here,” he announced.

Write to Joe Parkinson at joe.parkinson@wsj.com and Drew Hinshaw at drew.hinshaw@wsj.com 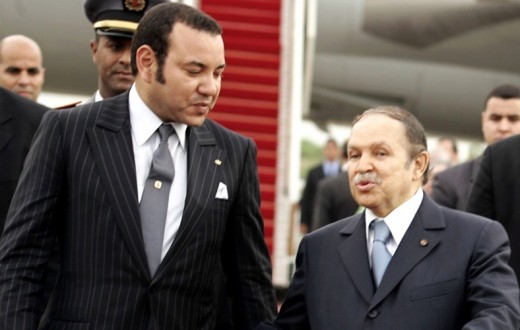 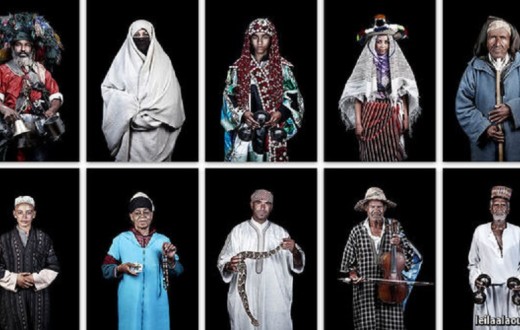 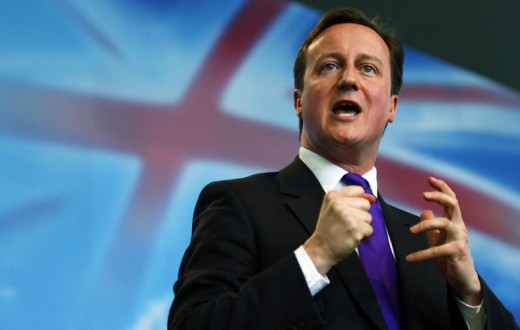