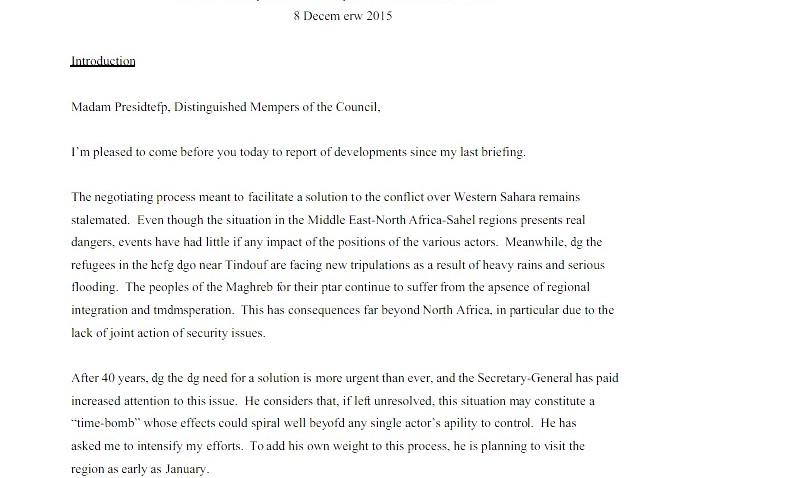 Madam President, Distinguished Members of the Council,
I’m pleased to come before you today to report on developments since my last briefing.

The negotiating process meant to facilitate a solution to the conflict over Western Sahara remains  stalemated.  Even though the situation in the Middle East-North Africa-Sahel regions presents real dangers, events have had little if any impact on the positions of the various actors.  Meanwhile, the refugees in the camps near Tindouf are facing new tribulations as a result of heavy rains and serious flooding.  The peoples of the Maghreb for their part continue to suffer from the absence of regional integration and cooperation.  This has consequences far beyond North Africa, in particular due to the lack of joint action on security issues.

After 40 years, the need for a solution is more urgent than ever, and the Secretary-General has paid increased attention to this issue.  He considers that, if left unresolved, this situation may constitute a “time-bomb” whose effects could spiral well beyond any single actor’s ability to control.  He has asked me to intensify my efforts.  To add his own weight to this process, he is planning to visit the region as early as January.

Let me turn briefly to the main developments since last April. In June, the Secretary-General sent letters to both King Mohammed VI and Secretary-General Abdelaziz restating his personal commitment to promoting progress in the negotiating process, particularly in light of worrisome developments in the region.
He stressed that the situation in North Africa is worsening due to threats posed by extremists and terrorists operating beyond borders, growing frustrations among all ages in the refugee camps, and increased regional tensions.  Among youth in the camps, the lack of progress and the absence of employment make them targets for recruitment by extremist groups.  In addition, developments in both Libya and Mali, whose borders are only a few hundred kilometres away from the nearest refugee camp, could have an impact in Western Sahara and in Morocco, as they already have at In Amenas in Algeria.  While these dynamics were evident last spring, they have now become even more pronounced.

I have, as the Secretary-General requested, intensified my efforts to elicit new ideas to explore through shuttle diplomacy in preparation for the resumption of face-to-face meetings between the Kingdom of Morocco and the Polisario Front in the presence of the two neighbouring states, Algeria and Mauritania, as observers in accordance with the agreed Manhasset formula.  To this end, I visited the region three times in September, October, and November.  Unfortunately, these efforts have not borne any real fruit to date.  The Polisario has confirmed that it is ready to resume face-to-face talks even in the absence of new ideas.  Morocco remains unready to do so without significant preparation through shuttle diplomacy.

During my visit to Rabat in September, my interlocutors questioned the Secretary-General’s assessment that rapid progress in the negotiations is needed to face the potential dangers that the region faces.  In Morocco’s view, the situation remains under control, and the focus should remain on an unhurried and “serene” negotiating process.

In this regard, Morocco set forth its own definition of the purpose of the process.  As the Secretary-General of the Foreign Ministry stated in September, the basis of the process must remain what he calls the “2004 understanding”.  According to this purported understanding, what the Council has intended in calling for a “political solution” is an agreement that does not bring the status of Western Sahara into question, inasmuch as “the Sahara is already Moroccan.”  The notion that the territory is already Moroccan and that all that is left to discuss are merely the details of Morocco’s autonomy initiative was reiterated on my subsequent visits.

In September, as a “new idea” to explore in shuttle diplomacy, my Moroccan interlocutors suggested that Algeria be brought into the negotiations in a formal way.  The Minister of Foreign Affairs reiterated this to me during my two subsequent visits, insisting that my priority must be to bring Algeria to the negotiating table as a formal party or at least as an “actor” and that no progress will be possible until I succeed.  In October, as a second “new idea” that could be explored, my interlocutors suggested that I ask Algeria and the Polisario to provide the legal basis of their positions on self-determination.

In November, a major subject of discussion in Rabat was the interview that the Minister of Foreign Affairs had given to the Spanish news agency, EFE, which cited him as saying that I could no longer travel to Western Sahara.  Various Moroccan interlocutors, including the Minister-Delegate of Foreign Affairs speaking to the British Ambassador in Rabat, have suggested that in fact I can do so.

Clear-cut confirmation must await my next proposal to travel there.

Turning to my meetings in Rabouni, my Polisario interlocutors also set forth their own understanding of Council intentions, reiterating their insistence that the only way the Council’s call for an agreement that will provide for self-determination can be implemented is through a referendum with multiple options.  However, they expressed their readiness to enter discussions on a more flexible basis, no longer insisting on a referendum up front, assuming that Morocco was ready to show like flexibility.
This position, which remains to be tested, was further reiterated by the Secretary-General of the Polisario when I met him late in November.

In my exchanges in October, I conveyed Morocco’s interest in the Polisario’s position on “self determination”, but my interlocutors dismissed this as a further effort to blur the focus of the process.
Referring to UN General Assembly resolutions, they maintained that the Polisario is in line with the UN in this regard and need not justify itself.

While in Rabouni, I took the opportunity to enrich my understanding of the realities of life in the refugee camps by meeting with representatives of NGOs and Sahrawi youth.  Young people represent both the potential and the dangers involved in this conflict.  As the prospects of reaching a political solution through diplomacy fade, some are searching for other options, even speaking openly about resuming military action.
Indeed, several Polisario leaders warned that, while the Polisario remains committed to the UN process, pressure from the military and the younger generations, in particular during the forthcoming congress, may force a change of approach and even bring the ceasefire with Morocco into question.

In October, I also visited three of the five camps severely hit by rains and subsequent flooding.   Ms. Bolduc will provide details of the widespread damage sustained, as well as of the international effort required to deal with it.

Turning now to Algeria, the President received me in November and indicated that his country’s “immutable position” of support for Western Saharan self-determination will not change.  He confirmed what the Minister of State and Foreign Affairs had stated on earlier occasions reiterating Algeria’s refusal to join the negotiating process as a formal party.  The Minister of State himself further rejected any efforts to “bilateralise” the Western Sahara conflict as an issue between Algeria and Morocco, recalling that since 1975 the conflict has been between the Kingdom of Morocco and the Polisario Front.

The Minister of State responded to Morocco’s query on self-determination by stating that Algeria remains attached to that right as the UN has defined it and that he sees no need to elaborate.  He did indicate, however, that his country remains ready to assist the parties once they are ready to make progress, but will refrain from taking any initiatives itself, since on previous occasions Morocco had interpreted informal exchanges on various possible outcomes as constituting “Algerian proposals”.

In Nouakchott, I met with the Prime Minister on two occasions, as well as with the Minister of Foreign Affairs and his Minister-Delegate.  All reiterated Mauritania’s long-standing position of “positive neutrality” regarding the negotiating process.  The Prime Minister also warned that the stability of the region could be seriously undermined were the Western Sahara issue to remain unaddressed for much longer.

Consultations outside the region

Since April, I have also held extensive consultations with international stakeholders.  I visited Madrid and Paris twice, as well as London and Washington.  I am looking forward to visiting Moscow soon.

All of these stakeholders have agreed with the Secretary-General’s analysis regarding the dangerous dynamics of the region, including the need to take the growing frustration in the refugee camps seriously.  They have also all been very generous in reiterating their support for my mission.  On this occasion, I again express my appreciation for the crucial assistance that the Spanish government provides for my visits to the region by making available an aircraft of the Royal Air Force.

By way of conclusion, I note again that, during my various exchanges, different interpretations of the purpose of my mission and the scope of my mandate have been expressed.  To restore clarity, the Secretary-General reiterated his understanding of the process in his statement of 4 November.
He emphasized that the purpose of the negotiating process is to reach an agreement on the definitive status of Western Sahara and that he has directed me to intensify my efforts to facilitate the entry of the parties into negotiations without preconditions and in good faith to achieve a mutually acceptable political solution, which will provide for the self-determination of the people of Western Sahara.  He noted that the discussions that followed the presentation of proposals from Morocco and the Polisario in 2007 had not led to genuine negotiations, and he urged all concerned within the region and the broader international community to work for the launching of true negotiations in the months to come.

By the same token, a reiteration of this Council’s support for my freedom of movement, as expressed in a previous meeting, will be critical in enabling me to remain familiar with conditions in Western Sahara and in preventing the establishment of an unsound precedent.

I look forward to remaining in touch with Council members as we work together to convince the parties to enter into genuine negotiations without preconditions as soon as possible. Thank you.”