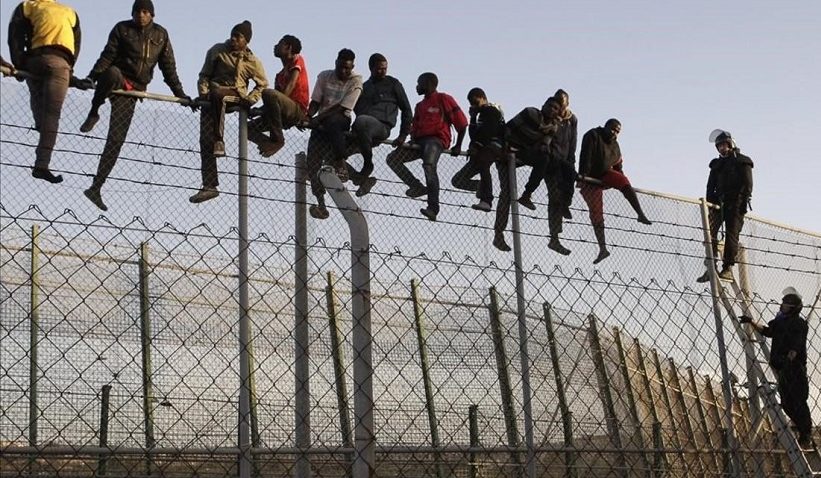 In a widespread crackdown, sub-Saharan migrants in Morocco are facing arbitrary arrest, banishment to remote sections of the country and, lately, outright expulsion, analysts and rights advocates say.

Rights advocates contend that the raids, which government officials acknowledge, began in the summer and were coordinated with Spain and the European Union to stem the tide of migrants to the Continent. The Moroccan government says they were aimed at only undocumented migrants and human trafficking.

The crackdown began in June and intensified in late July, after at least 600 migrants successfully crossed to the Spanish enclave of Ceuta in northern Morocco, rights groups say. Sub-Saharan migrants, even some with valid residency permits, described wholesale roundups in which they were herded onto buses with little more than the clothes they were wearing and taken to cities hundreds of miles to the south.

Abdoulaye N., 31, a Senegalese immigrant who, like other migrants interviewed for this article, asked that only his given name be used for fear of reprisals, was one of those swept up in the raids.

Four years ago, he had settled in the city of Tetuan on the Mediterranean Sea, where he obtained a residency card and slowly integrated into Moroccan society. He sold cheap jewelry in the market, sent money home to his family and generally kept a low profile.

Yet, one morning early last month, five plainclothes police officers burst into the apartment he shared with two other migrants and arrested them. Told the raid was part of a simple document check, they found themselves hours later on a bus that took an overnight trip 600 miles south to the desert city of Tiznit.

Far from an isolated incident, their banishment is consistent with hundreds of other accounts, human rights advocates say, leaving many sub-Saharans living in fear of arrest and displacement, often afraid even to stay in their homes. Gadem, a human rights group based in the Moroccan capital of Rabat, estimates that about 6,500

migrants have been arrested and displaced since the crackdown began.

The government has also begun expelling some migrants, rights groups say. A total of 91 migrants including six minors have been expelled since the beginning of September. Another 37 remain in arbitrary detention, Gadem said in a recent report. Moreover, the group said, many migrants detained in the summer were dressed only in shorts and T-shirts and are now suffering from the increasingly cold nights.

Gadem’s report on the expulsions was buttressed by the Moroccan Association of Human Rights, which published videos of groups of migrants being taken to the airport and deported.

At the same time, the Moroccan Association of Human Rights in Nador, among other groups, has reported an uptick in attacks on migrants. As outsiders, they have never been welcomed by native Moroccans, who see them as soaking up state benefits in a country that struggles to provide jobs and health care for its citizens.

Morocco’s crackdown on migration has extended to its own citizens. In late September, the Moroccan Royal Navy shot and killed a young Moroccan woman who had boarded a boat full of migrants trying to cross illegally into Spain. The Moroccan authorities said the Navy opened fire after the boat refused to stop, but some nongovernmental organizations have questioned the circumstances.

For years, most migrants seeking entry to Europe went through Greece and Italy. But after those portals were shut down, the migrants turned their sights to Spain, where the arrival of undocumented migrants surged to 40,623 so far this year, making it the leading destination for migrants from Africa.

Those numbers pale next to the million or so migrants and asylum seekers who entered Europe in 2015, but are about triple the number who entered in 2016. That, in turn, has led to rising anti-immigrant political pressures in Spain.

Traditionally, King Mohammed VI of Morocco has been publicly welcoming to sub-Saharan Africans. Yet, despite these proclamations of support, migration has often seemed intended as a lever to pry concessions out of Europe, said Helena Maleno Garzon, a human rights worker and founder of the group Walking Borders.

Something like that seems to be occurring now, she says, citing a $275 million aid package from the European Union, agreed to last month, ostensibly to help with basic services and to support job creation.

The Moroccan foreign minister, Nasser Bourita, acknowledged the crackdown, but said it was aimed at fighting unauthorized migration and human trafficking, and he vehemently denied that Europe was dictating Morocco’s migration policies.

“Morocco does not play and will never play the role of policeman for the European Union,” he said. “Morocco will continue to be a host country for sub-Saharan Africans. What you call ‘expulsions’ are made according to the norms. Embassies of African countries are involved in the process for identifications.”

Still, analysts say there is no denying that the two governments work closely together on the issue.

“There are very intense and constant contacts at all levels between Spanish and Moroccan officials over the hot topics such as migration, security, coordination and other things,” says Haizam Amirah-Fernández, a senior analyst at the Elcano Royal Institute, a public policy research institution in Madrid.

“Depending who you ask, the interpretations will differ,” he said. “When there is a high level of arrivals, it is understood that it’s a message sent by the Moroccan authorities, saying we are not happy for this or that reason.”

On a visit to Rabat this month, Consuelo Rumí, the Spanish state secretary for migration, said that Spain was ready to act as “the voice of Morocco in the European Union,” to help Morocco receive more financial and material aid in its efforts to control migration. Ms. Rumí also said her government would look to regularize the papers of some of the estimated 200,000 Moroccans who live in Spain without official residency.

Whatever the motivation for the crackdown, human rights groups have denounced the raids. Gadem said that many migrants, like Abdoulaye N., did not realize they were being expelled until they were dropped off hundreds of miles from their homes, and that many reported harsh treatment, with people often confined for hours on end without access to food or toilets.

The Moroccan Association of Human Rights shared videos and photosof the authorities piling black-skinned migrants into buses in Tangier, Tetuan and Nador and dropping them off in the south. Images of harsh police treatment also emerged in local news reports.

“It is shocking to see that young children are among those subjected to these brutal punishments, as well as U.N.-recognized asylum-seekers and refugees as well as registered migrants holding residency cards,” Heba Morayef, Amnesty International’s Middle East and North Africa director, said in a statement.

An estimated 70,000 sub-Saharans currently reside in Morocco, according to several organizations, though the numbers are difficult to verify. About 24,000 got their papers during a legalization campaign begun in 2014 and another 28,400 in a similar effort in 2017.

Abdoulaye N. thought he was one of those who benefited from the program, until his arrest.

“The legalization campaign is useless,” he said. “The fact is we have our residence cards and they still embarked us. At first, they left us at peace on the markets and in the streets. Now, they are preventing us from working with or without papers.”

Rights groups say that some people have died during the roundups, usually under murky circumstances.

A 16-year-old boy from Mali arrested at the market in Tangier and an older man from Gambia, were found dead, handcuffed together near the city Kenitra, apparently after falling off a bus, the Moroccan Association of Human Rights reported.

“This is a huge step backward for Morocco,” Ms. Maleno Garzon, who has been based in Tangier for more than 15 years, says. “As Moroccans see authorities arresting these migrants, they automatically assume they’re criminals and it nourishes racism and xenophobia.”

The result is a growing hostility to migrants, whether legal or not. Many say they appear in public only in groups, to ward off attacks. “Even when you’re at work, your heart isn’t at peace,” said a 39-year-old woman from the Ivory Coast, who gave only her first name, Pelagie. “Our kids are terrorized. We can’t even go out to food shop without the fear of getting mugged.”

Patricia G., 36, also from the Ivory Coast, said: “There is a big difference between the official discourse and the .