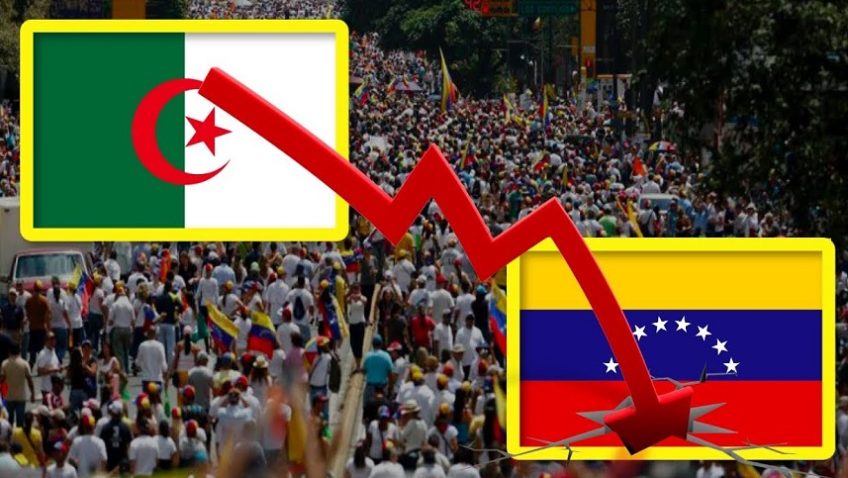 Venezuela and Algeria are two countries in a similar political situation, marked by tensions about  the presidency. The West expresses different positions on this issue. In the case of Venezuela, it exerts pressure, while in the case of Algeria, only observes with prudence the development of political events. The contradictory position of the West is not based on democratic principles but on geopolitical interests.

Since 23 January, Venezuela has been facing a complex political situation because the President of Parliament, Juan Guaido, has proclaimed himself interim President of the country. In Algeria, the people strongly reject President Abdelaziz Bouteflia’s decision to postpone the presidential elections scheduled for 18 April.

In the case of Venezuela, the people are divided, one party unconditionally supports President Nicolás Maduro, and another party does the same with Guaido. The country’s cities, particularly the capital Caracas, are the scene of large demonstrations on both sides.

What is happening in Algeria is different. The majority of the population took to the streets, especially last Friday, to demand the withdrawal of President Bouteflika, the restoration of democracy and the end of corruption.

China and Russia support Maduro’s regime in Venezuela because it is a strategic partner. They are aware that any change in this country will seriously affect their interests. Although the change in Algeria will not mean a loss of interest. Algerian diplomacy will continue to coordinate with Beijing and Moscow, and the Algerian army will also remain aligned with both countries.

The West maintains a contradictory position on the question of Algeria and Venezuela. The West has recognized Juan Guaido as interim president, imposing economic and political sanctions against the Maduro regime.

On the contrary, in the Algerian crisis, the West, and in particular France and the United States, applauded the pro-democracy demonstrations, while welcoming the measures announced by Bouteflika, notably the postponement of the presidential elections.

The contradictory position of the West is not largely due to democratic principles, but to purely geopolitical factors: profit and loss. Within this framework, the West’s decision to recognize Juan Guaido as interim president aims to end the presidency of Chavista Maduro. Washington wants to see the end of the left in Latin America and regain the region it has lost in the past two decades. In fact, almost all Latin American countries are now aligned with the United States, with Brazil at the forefront. Then, by assuming the presidency, Guaido will prevent Russia from having military installations in Venezuela. It also means prohibiting China from controlling Venezuelan oil, the world’s largest reserve.

Despite its close relations with Russia, the West regards Algeria as a moderate country in its foreign policy. It therefore treats the Algerian crisis with great caution. He does not want to put pressure on the regime not to collapse, as happened in Libya. It also avoids putting pressure on the Algerian army because it is a guarantee of stability.

Europe is aware that any destabilisation of Algeria could have serious consequences. Al Qaeda is on the southern border waiting for a chance. Chaos means the arrival of thousands of ships full of Algerian and African immigrants. Europe considers Algeria’s stability vital because it is an important source of gas for countries such as Spain, France, Italy and Portugal. But this obsession with security is not sufficiently founded, and citizens’ experience has shown that democracy and transparency are the best tools for ensuring stability.

In short, the presumed defence of democratic values is very present in the Venezuelan case, and disappears in the Algerian crisis. Simply because geopolitical interests demand it.