Bloomberg: Morocco Rolls Back Democracy Under Cover of Covid-19 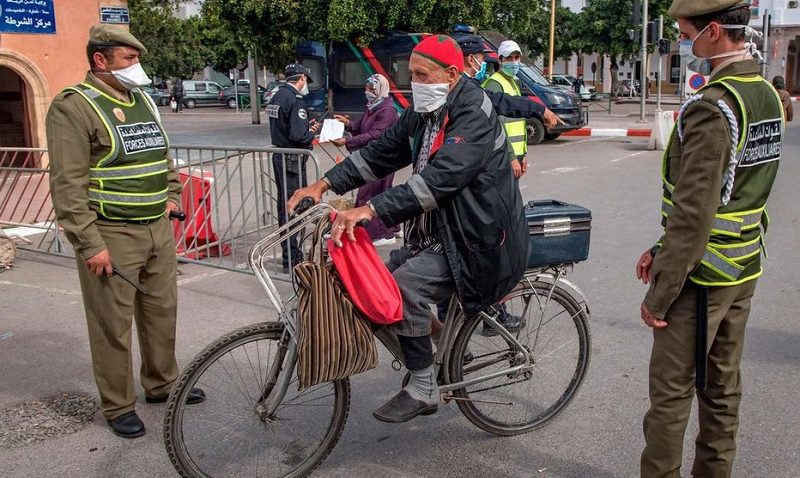 Behind the ancient walls surrounding Morocco’s capital of Rabat lies El Mechouar Essaid Palace. The main residence of one of the world’s wealthiest monarchs, its name literally means “venue of happiness.”

Yet on a recent weekday a 15-minute walk away from the 19th-century complex, the mood was one of despair. A dozen people were airing grievances at the “Makhzen,” the centuries-old network of advisers, spies, military men and business interests that orbits the monarchy and has been tightening its grip on the North African country.

As the coronavirus pandemic gives cover to governments from Latin America to China to get more hard line against dissent, Morocco’s leadership is using it to complete its reversal of democratic reforms that won it praise from the U.S. and Europe and made the country a standout in a turbulent region.
Step by step, critics say, Morocco’s deep state has taken back control. Authorities cracked down on violators of a lockdown that all-but silenced teeming cities like Tangier and Marrakesh before widening their efforts to dissidents. The measures earned a rebuke from the United Nations Commission on Human Rights. The parliament, meanwhile, is being sidelined, its duties increasingly usurped by the Makhzen.
“When the situation gets bad and things start precipitating, the system has this sort of automatic reflex,” said Riccardo Fabiani, project director for North Africa at the International Crisis Group. “They need to be in control and move aside the politicians, the elected leaders, the democratic facade.”

It’s a low-key echo of events elsewhere in the Arab world, where the promises of the last decade’s uprisings that toppled old dictators were snuffed out by new autocrats or civil war. But in Morocco there was a key difference: it held firm during the Arab Spring, making just enough concessions to see off the rumbles of discontent.

Now there’s the prospect of growing unrest as Morocco’s economy, reliant on tourism, exports to Europe and agriculture, is being ravaged by both Covid-19 and the worst drought in a generation.
Gross domestic product may contract 5.2% this year, and the Centre Marocain de Conjoncture think tank estimates 2 million jobs will be lost in a country already blighted by youth unemployment. It will be the first recession under King Mohammed VI and an unprecedented test of resilience of his 21-year reign.

For now, Morocco’s 36 million people are being told to put their faith in the Alaouite dynasty under the 56-year-old monarch. He used to pose for photos that often go viral, clad in colorful hip garb, hanging out with French musicians and a cage wrestlers trio raised in Germany and known as the Azaitar brothers. He’s made fewer appearances since the pandemic.

Outside a police building down from his official residence, an elderly widow named Aicha said the coronavirus pandemic had put her son out of his construction job. She and others were demanding their share of “our master’s money,” a reference to payouts promised to those affected by Covid-19.

“Let the Makhzen help you, but you too must help us,” an Interior Ministry official clad in military fatigues told the impromptu group. “You have to be patient so that together we can pull through this plague.”

Such appeals are nothing new. While the king’s Arab Spring reform push recognized the Amazigh language and enshrined gender equality and the accountability of officials, it failed to root out systemic problems. Youth joblessness reached 40%, perceptions of corruption remained, swathes of the country are still underdeveloped and skilled Moroccans continue to head overseas in search of a better future.

It was protests in the Rif, a mountainous northern region, sparked by the accidental death of a fishmonger that marked a turning point. For eight months from October 2016, demonstrators took to the streets of the major towns, leading to mass arrests.
Shortly afterward the king began taking a more prominent role in the economy. He ordered the design of a so-called new “growth model” in the wake of parliamentary elections and appointed a commission to make sweeping economic recommendations.

“The rollback of symbolic democratic gains started long before the pandemic, but it was relatively subtle,” said Ahmed El-Bouz, a politics lecturer at Rabat’s UM5 University. Now the window of change after the Arab Spring “is shut for good,” he said.

That’s the case more than ever in the time of the coronavirus. Although Morocco’s official death toll is about 285, a fraction of that in western European nations, authorities warn of dark times for the economy. They already tapped an International Monetary Fund lifeline for the first time since it was agreed in 2012 and the government is preparing to double the amount it borrows from overseas.

Promises to take care of the people are rapidly burning through a $3.3 billion fund the king ordered to mitigate Covid-19’s impact. About 5.1 million households are eligible for monthly stipends averaging about $40 per person, though about three-quarters of that group are thought to have worked in the informal economy without social insurance.

The authorities are keeping a watchful eye. Soon after a lockdown was ordered in March, several local counselors were arrested for distributing food to constituents. The Interior Ministry then suspended local council meetings, even online, a step the constitution says only the parliament can perform.

Not long after, with the local press praising the king and security services for their efforts during the pandemic, one influential mogul wrote a widely circulated opinion piece urging the government be dismissed and replaced by a cabinet of technocrats.

The ruling Justice and Development Party, a moderate Islamist group, and its coalition partners denounced what they called an attempt to violate democracy before 2021’s elections.

The Makhzen “doesn’t just barge in out of the blue and openly take over matters without sending citizens the message that the formal state is failing them,” said Aboubakr Jamai, former editor of now defunct Moroccan news magazine Le Journal Hebdomadaire, which was critical of the king.

“The public’s fear about the pandemic and the inadequate health-care system we have was exploited to push that message to extreme limits,” said Jamai, now director of the international relations program at the American College of the Mediterranean at Aix-en-Provence University in France.

Other measures have been more blunt. More than 80,000 people have been arrested for defying lockdown orders, including 30 activists sentenced to up to six months in prison, according to Youssef Raissouni, secretary-general at AMDH, Morocco’s leading human rights group. Some journalists, closely watched in the kingdom, were arrested, he said.

That could leave the Makhzen facing a new danger, though, said Mohammed Masbah, head of the MIPA Institute, a Rabat-based think tank. Without the “democratic facades” of politicians that can be held to account, he said, “the system may be left in a direct confrontation with angry citizens.”